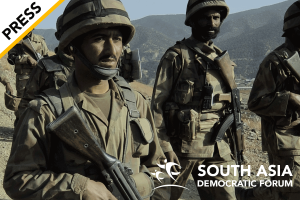 Pakistan started the New Year 2015 with another unfortunate episode in its truncated political history. One could once again hear the momentous military rhetoric of the “doctrine of necessity” in order to justify direct intervention into the country’s politics, to establish formal prerogatives and an institutionally ensured role for the military. On January 6, the National Assembly and the Senate approved the 21st Constitutional Amendment Bill and Pakistan Army Act 1952 (Amendment) Bill 2015, unopposed.

These laws will provide constitutional cover for extending the jurisdiction to military courts for the trial of terrorism suspects. More concrete, it provides for the creation of speed trial military courts for offenses relating to terrorism, waging war against Pakistan and prevention of acts threatening the security of the country. The 21st Amendment Act shall remain in force for two years starting from January 7, 2015 when the President signed the Act.

Unsurprisingly, the decision to enforce the legal framework was publicly portrayed as a political response to the atrocious Peshawar school massacre or the Wagah border blast (both end of last year), in which hundreds of people were murdered or severely wounded by terrorists. Although terrorism and Islamic fundamentalism needs to be combated fervently, the latest constitutional amendment gives reason to worry. Several leading oppositional politicians, lawyers, and political analysts have expressed their opposition to new, special military courts.

There are several reasons why:

In other words, the judicial system must ensure that civilians accused of a criminal offense of any nature, including terrorism, are brought to justice by civilian courts. Military courts in many countries do not have a good reputation or record of offering a fair judicial system, especially regarding human rights and fundamental principles of justice.

This creates a severe distortion of the separation of powers and undermines the basic structure of the constitution by giving an extraordinary judicial mandate to an executive agent. Furthermore, it deepens the rift between the judiciary and legislature. In sum, the new legal framework will lead to a further destabilization of the country’s political institutions.

Here one has to be aware of the fact, that the latest constitutional engineering bolsters the already existing informal dominance through the manifestation of the strongest formal institutional role for the military in Pakistan political decision making process ever. The handing over of more power to an institution that has undermined and changed the Constitution several times in the past is more than just an act of negligence. The 21st Amendment can be equated to the surrender of any democratic achievements and further widens the path of deeply entrenched authoritarian tendencies.

Taking the genesis of terrorism and Islamic fundamentalism into account, it is also naïve to think that Pakistan’s public safety will improve or be guaranteed with the setup of military courts. Furthermore, the argument put forth that military courts are more capable of protecting the life and integrity of judges and witnesses must be put in perspective with view on the high profile attacks on military installations and the undermining of Pakistan’s armed forces by Islamic fundamentalist elements during the last years.

This move is yet another example for the dysfunctional political system as well as the incompetence and unwillingness of the civilian part of the country’s so called “establishment” to deal with the tremendous challenges the country has to face. Therefore, it would be a misinterpretation to proclaim that civilians were completely coerced into accepting special military courts. It is rather the often observed unwillingness of the civilian leadership and political class to tackle militancy and fundamentalism, and thus also to secure the safety of its people.

The military is once again in charge and the civilians are out; another example for shifting of responsibilities at the cost of democratic institutions. There was and still is enough time and freedom for civilians to maneuver in order to carry out necessary substantial reforms to improve the judicial criminal system. Ultimately it is also noteworthy that the 21st Amendment—even it is looks like—is not just a short-sited knee-jerk response or “extraordinary measure for an extraordinary situation” by civilians, quite the contrary. It resembles a well-planned, gradual strategy intended to build up a formal role of the military in the country’s political landscape. Some people would call it a “constitutional coup” or as “a monument to the betrayal of the civilian, democratic cause!”

Pakistan: Between Coup and Constitutional Engineering