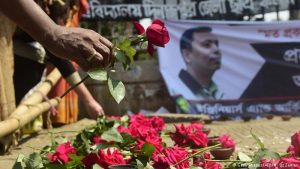 On February 26 the blogger Avijit Roy, a US-citizen of Bangladeshi origin, published author, and prominent voice against religious intolerance was murdered publicly in Dhaka after returning from a book fair (cf. The Guardian, 27.2.2015; cf. Alam, 27.2.2015). Roy, an engineer by profession was not only known as a passionate writer but also as the founder of the Bengali language blog Mukto-Mona, the “Free Mind”. Since 2000, Mukto-Mona served as a platform for independent thinkers, critical rationalists, humanists and sceptics in South Asia (cf. BBC, 27.2.2015b). As a defender of the “free-thought movement” in Bangladesh he was an advocate of liberal secular writing, scientific reasoning, human rights and particular sensitive social issues in conservative Bangladesh such as LGBT rights (cf. Alam, 27.2.2015; cf. BBC, 27.2.2015a; 27.2.2015b). Furthermore, he was an outstanding adversary of Jihadism but also of religious zealots in general, which were enforcing communalism and using religion as business model to further their agenda (cf. Roy, 2015). Roy defended atheism as “a rational concept to oppose any unscientific and irrational belief” (Roy quoted in Alam, 27.2.2015). Thus, Roy was convinced that all supernatural concepts and explanations that are part of religions must be rejected. As an adherent of metaphysical naturalism, Roy’s writings challenged especially the claims that the Qu’ran contained scientific insights. Based on his reading, he did found neither a revealing of a cientific principle or idea nor a scientific word in this Holy Book (cf. Tran/Banerjee, 27.2.2015). Subsequently, according to Roy the Qur’an should not be considered a scientific book. In this context it is important to note that, besides being an atheist himself, Roy always strived to respect the religious feelings of the people, trying to express his criticism in a sophisticated and gentle style. Therefore, the assassination of Roy has nothing to do with the harming of religious sentiments but with the silencing of voices that challenge fundamentalist identity constructions. Or in the words of US State Department spokeswoman Jen Psaki, the killing of Roy is “an assault on Bangladesh’s proud tradition of free intellectual and religious speech” (Psaki quoted in BBC, 27.2.2015a).

Having in mind the traumatic Peshawar school massacre in Pakistan as well as the attack on the Charlie Hebdo magazine in Paris, Roy likened religious extremism to a “highly contagious virus” (cf. Tran/Banerjee, 27.2.2015; cf. BBC, 27.2.2015a). In one of his several books, called Biswasher Virus (Virus of Faith), he argues that “faith-based terrorism will wreak havoc on society in epidemic proportions” (BBC, 27.2.2015b), a statement, which he underpins in one of his numerous articles describing “religious extremism” as “a virus of faith.” (BBC, 27.2.2015b). This line of argumentation directly hit the cranial nerve of Jihadists, which are trying to highjack the definition and interpretation of national identity in the Muslim-majority nation of Bangladesh, resulting in numerous death threats before his assassination (cf. Sanchez, 28.2.2015).

Such a phenomenon is nothing new in the country, neither that independent thinkers are getting killed nor the extraordinarily brutal manner. Roy was one of several writers who attacked by Islamic fundamentalists. In 2004, Humayun Azad, a Bangladeshi academic teacher and poet was found dead in Munich in 2004 after he barely survived an assassination attempt in Bangladesh (cf. Tran/Banerjee, 27.2.2015). In 2013, another blogger, Ahmed Rajib Haider, who was also known for speaking out against religious fundamentalism, was killed (cf. Alam, 27.2.2015). Asif Mohuiddin, another victim of Bangladeshi’s religious fanatics, was seriously wounded as he took part in the Shabhag movement demanding the punishment of leading Islamists for crimes committed during the war of independence from Pakistan in 1971 (cf. Roy, 2015). Eminent writer Taslima Nasreen, who too had to suffer from systematic persecution and harassment by hard-line Islamists for her outspokenness, especially on matters of religion and gender, was forced to leave the country, due to her statement, “Bangladesh has become a safe haven for Islamists where they can do whatever they like” (Nasreem quoted in Sanchez, 28.2.2015). In this context, the massive protest against the killing of Roy sends a clear signal, to government that if it does not implement consequent measures against religious extremists, Bangladesh will turn into a place dominated by Islamist extremism in which no “free mind” is safe.

In sum, the killings of secular thinkers in Bangladesh are g only the gloomy peak of growing Jihadi influence in the country. Since the early 1990s, a silent but steady process of Islamisation started in the country. The breeding ground for this process was prepared by the country’s military rulers, General Ziaur Rahman (1975-1981) and General H.M. Ershad (1982-1990). During both autocratic governments, far reaching constitutional amendments were introduced which undermined the institutional bulwark, i.e. the principles of secularism and democracy, against a potential Islamist takeover. More concretely, Ziaur and Ershad diluted the secular principles in the constitution in order to gain legitimacy by playing the religious card. They were undoubtedly inspired by their Pakistani peer, General Zia-ul Haq (1977-1988), under whose dictatorial regime Pakistan descended into a marsh of Islamic fundamentalism. By anchoring Islam in the constitution and putting religion at the centre of the political discourse, Bangladesh was effectively transformed into an Islamic state. As a result, Islamist parties have been able to incrementally appropriate room in the political arena, despite the fact that they did not enjoy much general public support. It is interesting to mention, that in this direction Pakistan serves as a crucial point of reference: the fact that Islamist parties do not get many votes percentage-wise does not automatically imply that they are marginalised when it comes to exercising political influence and access to state resources. Here, aggressive political behaviour combined with extra-judicial measures (e.g. black mailing, target killings, major terrorist activities) are used as a compensation for the lack of electoral support.

The high level of Islamist penetration of state and society was further enhanced during the Bangladesh Nationalist Party (BNP) governments (1991–1996, 2001–2006). Not only were using state resources to promote their ‘anti-secular revolution’ but also to push the entrenchment of Islamic fundamentalist elements deeply into the political-administrative structure of the country.

Today, Islamisation is not a silent process anymore: it is loud, aggressive and it has reached the centre of power politics in Dhaka. In the given context, in 2013 Jihadists violently demanded the public execution of atheist bloggers and called for new (blasphemy) laws to combat writing critical of Islam and the Prophet Muhammad (AFP, 27.2.2015). The latest killing of Avijit Roy poses an existential threat to everything that Bangladesh stands for, especially its freedom struggle of 1971: democracy, freedom of mind, and religious tolerance.

To sum up, it is time to develop a coherent and stringent strategy against religious fundamentalism. The few measures carried out by the current government to contain the Islamist threats remain ineffective, especially if one looks at the mobilising capacities of the Islamists and the on-going operations of ‘officially’ banned organisations. In order to stop this threat, a collective national consensus and stringent engagement of all democratic and secular forces is necessary. Last but not least, Bangladesh political decision-makers must overcome their ‘state of denial’ and finally enforce expeditious prosecution and punishment of militant religious extremism; as long as this is not achieved, Bangladesh risks falling even deeper in the clutches of Islamic fundamentalism.

The Guardian (27.2.2015), American atheist blogger hacked to death in Bangladesh,

Tran, Mark and Subhajit Banerjee (27.2.2015), Avijit Roy, the blogger who wouldn’t back down in the face of threats, The Guardian,