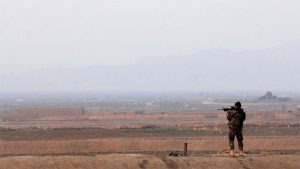 There is life in the old dog yet! This simplistic slogan demonstrates how wrong international media and many analysts were by assessing the latest trajectories within the Taliban and the future path this movement might take. To be precise, the tendency to announce the ushered disappearance of the Taliban, as they are commonly known on both sides of the Durand line, the much troubled Afghanistan-Pakistan (Af-Pak) border, turned out to be a disastrous, consequential misunderstanding of the facts on the ground. There are no doubts that the Taliban had to face serious challenges after the fall of their Islamic fundamentalist terror regime in Afghanistan (1996-2001). The most noteworthy determinants influencing the recent course of the Taliban are the advent of the Islamic State (IS) in the Af-Pak region leading to processes of defections, the internal struggles over leadership structure after the official announcement of the death of spiritual leader Mullah Omar, the latest major Pakistan military Operation Zarb-e-Azb against Taliban hideouts in the Federal Administered Tribal Areas (FATA), and the loss of numerous crucial figures due to US drone strikes. However, the latest ‘Kunduz offensive’ and subsequent military operations (?) by the Taliban in the north of Afghanistan make obvious that this terrorist group seems not to be weakened at all, but even stronger than before. This is exemplified by the fact that they can operate (militarily) successful in an area of deeply entrenched resistance and sentiments against Taliban as well as their as hostile perceived Pashtun culture from the South-East of the country. Especially the latter phenomenon is creating a major headache among the ‘experts’ announcing the Taliban’s path into insignificance. Therefore, the extraordinary resilience of this movement is revealing several puzzles and indicates suggestions for how to address them.

To begin with, even if the Taliban are not able to hold Kunduz for a long time, the ongoing battle for the city has severe implications for the security situation and is thus embarrassing for the national and provincial governments as well as for the Afghan National Security Forces (ANSF) and remaining international troops. As such, the battle for Kunduz, the sixth greatest urban centre in Afghanistan, is of a highly symbolic nature. At the very core of the symbolism of Kunduz lies the semblance of a tectonic shift in the Taliban’s self-conception and especially self-portrayal: from a mainly exclusive towards an inclusive movement.

This is why one should shed light on the composition of the ‘Taliban forces’ involved in the takeover of Kunduz, and on which other groups were joining the fight of the Islamists insurgents. It seems that the Taliban are trying to learn a lesson from the past and attempt to broaden their social structure and base by softening their stand toward Afghanistan’s non-Pashtun population and non-Afghan migrants. As such, the ‘battle over Kunduz’ symbolizes a change in overall political strategy and subsequently the recruitment patterns of the Taliban: from a mainly Pashtun-focused composition of its ranks and files towards a more ‘multi-ethnic force’ in order to improve their chances of maintaining rule over captures of territory, especially in the north of Afghanistan, which has been the stronghold of anti-Taliban forces. It seems obvious that besides Arabs, Pakistanis (not only from the Federally  Administered Tribal Areas / FATA, but also Punjabis), Bangladeshis (including Rohingya refugees from Myanmar recruited particularly in Bangladesh), and especially militants from Central Asia and China’s Xinjiang Uighur Autonomous Region, namely Uighurs (who have been allied with and fighting for the Taliban for several years), are joining the battle over Kunduz.

In this context, one must elaborate on the militant sections of the Uighurs, determining a toxic mix of separatism, political radicalization, terrorism, and Jihadism. According to several observers and analysts, Uighurs are fighting in Kunduz as well, and this rises the question to what extent and why they are siding with the Taliban.

In order to explain the genesis of the Uighur engagement in Afghanistan, one must state that this was only possible with the help of international criminal and terrorist organisations. With the help of Turkish criminal networks, for example, and especially through providing faked Turkish passports, Uighur militants were able to enter Afghanistan and Pakistan (and other Asian countries) on a larger scale to join the international Jihad networks. In Afghan and Pakistani camps, the Uighurs received ideological indoctrination, military training in weapons and explosives. Many of the Uighurs fighters are organized in an umbrella group called East Turkestan Islamic Movement (ETIM). The ETIM was listed as one of the ‘more extreme separatist groups’ and as a terrorist organization by the US in 2002. The UN al-Qaida/Taliban Sanctions Committee listed the ETIM for its associations with al-Qaeda. ETIM fighters fought alongside al-Qaida and Taliban forces in Afghanistan during the US-led Operation Enduring Freedom and offered support fighting against NATO’s International Security Assistance Force (ISAF) mission. It is important to note that al-Qaeda joined the Islamic state, which declared Jihad against China, by condemning Beijing for its handling of its Uighur Muslim population. Both organisations see their fight against the Chinese as their “Islamic responsibility” describing them as “enemy of all Muslims”.

To this date, any assessment of ETIM regarding size, scope and capacity is difficult, the strength of ETIM and other militant Uighur groups operating outside China, like the Turkestan Islamic Party (TIP) in Central Asia, is unclear. A Reuters report from 2014 placed the figures at around 400 fighters in Pakistan and 250 in Afghanistan. In this context,we should expect that some of them joined the exodus of Afghan refugees towards Europe. However, even if the number of Uighur militants seems to be relatively marginal and they keep a low profile in Pakistan, they constitute a concrete, serious threat. Their lack in members and material resources can be easily compensated by logistic, financial and personal support from Jihadist networks or through the integration of the Uighurs in existing Jihadist structure and actions, especially since the Taliban are increasing their activities in northern Afghanistan. Here, the Uighurs gain significance in two directions: First, Uighurs can serve as a link between the Taliban and Turkic militants from Central Asia. Some of them already defected to the Islamic State in Afghanistan. However, the Taliban are most likely instrumentalising the Uighurs for recruiting non-Pashtuns. Because the Uighurs were involved in terrorist activities in Uzbekistan, Tajikistan, Chechnya, Kyrgyzstan, Kazakhstan, they are remarkably connected with respective terrorist elements and structures in (and from) Central Asia.

Finally, besides being a struggle over a significant geostrategic location (gateway to Afghanistan’s north-eastern provinces and Central Asia via Tajikistan), a major reason for Uighurs joining the ‘battle over Kunduz’ goes beyond pure symbolism. The battleground Kunduz is the first real major litmus test for the ANSF in which they have to prove that they are able to enforce the control and power of the central government in Kabul nationwide. As such, the security of Kunduz serves also an indication for the performance and stability of the new government of President Mohammad Ashraf Ghani and Chief Executive Officer Abdullah Abdullah. Creating instability in Afghanistan by undermining the power of the Ghani-Abdullah Abdullah political duo is a major aim of the Uighurs. The main rationale behind this intention is that a weakened national government in Kabul would seriously undermine Chinese interests in Afghanistan, namely political stability and security for Beijing’s development and economic projects as well as Chinese citizens in the country.