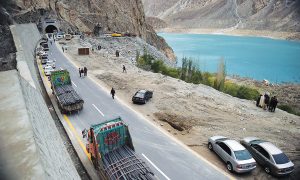 The China-Pakistan Economic Corridor (CPEC), a multi-billion dollar infrastructure investment project, is heralded as a game changer for Pakistan’s economy and regional cooperation. Being a crucial part of a major development initiative led by China, known as ‘One Belt, One Road’ (OBOR), to connect Asia with Europe, the Middle East and Africa, the CPEC is much linked to hopes, interests, as well as regional and global geopolitics. However, such a megaproject raises numerous questions especially regarding the feasibility of its implementation, the impact on the region as well as the nature of India’s position towards the endeavour.

To begin with, one should shed some light on Pakistani and Chinese interests: First, Pakistan is in urgent need for major investments to boost its flailing economy. Second, Islamabad is looking to diversify its foreign aid and investment. In this context, it is obviously keen on reducing its financial dependence vis a vis the US. Third, Pakistan expects to expand the build-up of its infrastructure, deepen energy capacities, and manufactural hubs, improve the living conditions in its poorer provinces, reduce unemployment, increase knowhow, and reverse negative processes of brain drain and capital flight.

Fourth, Pakistan wants to deepen its bilateral ties with China from mainly geopolitical towards mutually entrenched economic and socio-political relations. Last but not least, Pakistan’s security establishment hopes that an economic uplift will help to contain ‘religious radicalization’ and militancy, which is also high on China’s political agenda. Beijing is convinced that sustainable economic prosperity in Pakistan will help to contain terrorism, which in the past has proven to be a great challenge to Chinese economic interests, territorial integrity and security. Furthermore, the land-based CPEC would provide China with another access route to the Indian Ocean and allow to by-pass the Malacca straits that could be blocked in times of tension. It is also expected, that the CPEC will be shorter, cheaper and avoids the risk of piracy. Another significant positive aspect of the CPEC is, that it could help to reduce the economic imbalance between the prosperous Eastern and underdeveloped Western part of China. Here, the CPEC should contribute to more economic growth and enable opening up routes to the remote, landlocked Xinjiang province. Against this backdrop, there is hope in Beijing that an improvement of the socio-economic conditions in Xinjiang will help to undermine local separatist tendencies.

However, in order to implement the CPEC successfully, Pakistan still has to confront severe challenges and address unresolved problems. Due to Pakistan’s handling of the CPEC project, there is a lack of national consensus and harmony among the provinces (especially between Balochistan and Khyber Pakhtunkhwa (KPK) on one side and Punjab and Sindh on the other side) and between the regions and the federal government. One of the most critical issues is the concrete route of the corridor. The CPEC, is supposed to connect Kashgar in China’s western Xinyang province with south-western port of Gwardar via three routes, the western and eastern alignments, and the central route. Despite the promise of Prime Minister Nawaz Sharif to build all three routes with the Western alignment first, the provinces of Baluchistan and KPK are accusing Islamabad of promoting the Eastern route especially favouring the Punjab province. Furthermore, there is a lack of transparency and communication between Islamabad and the provinces creating an atmosphere of secrecy and confusion surrounding the CPEC project. The decision-making is not clear, especially since provinces are not adequately included. Subsequently the smaller provinces are wondering how they can benefit from the CPEC, if at all. In addition, the lack of security is worrisome.

There is an on-going insurgency in Balochistan, home to the province where the Gwadar port as the central piece of the CPEC is located. The insurgents identify the CPEC as an occupation of their homeland and an attempt to marginalize the native Baloch people. Additionally, Pakistan Taliban and other militant elements will determine another challenge for the safety of the CPEC project. The project also has to deal with severe natural calamities negatively affecting the Karakorum highway. One should also take into account that during winter the route will most likely be closed. Unfortunately, the CPEC implementation has shattered many deadlines and is susceptible to insufficient management capacities of Pakistani authorities. As a result, many of the on-going CPEC projects have already been delayed and costs have skyrocketed, which has not been particular helpful in stifling domestic critics.

Here lies a main crux of the matter: China wants that the CPEC to be implemented as soon as possible but also be carried and supported by a national consensus. At the moment it seems, that Beijing is not only concerned about the security of its investments and workers but also because of the disharmony among the provinces and existing centre-region tensions. The fact that Pakistan focuses mainly on infrastructure and energy projects and not so much on the build-up of industrial centres does not please China all too much. This unstable status quo has created an imminent threat for Pakistan that China might seek for alternatives, for example a potential Iran-China Corridor. However, I argue that a potential Iran-China Economic Corridor can function as an additional option for Beijing but not as a substitute for the CPEC.

One must wonder what India’s concerns, potential benefits and options regarding the CPEC look like. One of the greatest hurdles for any potential cooperation between India and Pakistan in the CPEC project is that the corridor is projected to cross Gilgit-Baltistan, which is part of the disputed territory of Kashmir. Any potential cooperation including India in the CPEC project might be interpreted as a legitimisation of the status quo regarding the territory controlled by Pakistan but claimed by New Delhi. Further concerns of New Delhi’s security circles in revolve around the prospect that Gwadar may one day become a Chinese naval base and increase Pakistan-China security cooperation alongside the CPEC. In this context, CPEC heightens the notion that the Sino-Pakistani partnership poses a challenge to India’s regional standing and attempts to contain New Delhi’s influence in South Asia and beyond.

Nevertheless, despite these unresolved issues and concerns by India as well as the existing challenges towards a successful implementation of the CPEC by Pakistan, New Delhi could benefit extensively from the entire OBOR initiative. There are clear signs of growing Sino-Indian economic cooperation; China is also willing to invest tremendously in Indian infrastructure. Subsequently, the OBOR in general and the CPEC in particular could help to foster Indian trade and development. In this context, Pakistan and India could work together to revive existing transport and economic linkages, which are in abeyance at the moment.

Nonetheless, India needs to have a debate on its position regarding CPEC, which until now surprisingly has not yet happened. This discourse must be based on a rational evaluation of policy options, free from emotive arguments.

COMMENT Nr.19 – The China-Pakistan Economic Corridor (CPEC): Feasibility and the need for an assessment of India’s role