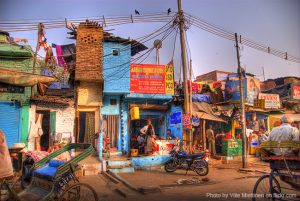 The China-Pakistan Economic Corridor (CPEC), a multi-billion dollar infrastructure investment project, is heralded as a game changer for Pakistan’s economy and regional cooperation. It is a crucial part of a major development initiative led by China, known as the New Silk Road or ‘One Belt, One Road’ (OBOR), to connect Asia with Europe and the Middle East with Africa via land (belt) and sea (road). For the CPEC project and for those involved, it evokes hopes and a myriad of interests, and it signals a significant geopolitical shift.

Praised as a new economic lifeline, CPEC is an essential link between the ‘belt and road’. In order to provide this connection, CPEC should connect Kashgar in China’s Xinjiang Uygur Autonomous Region (XUAR) with Gwadar port on the Balochistan coast in Pakistan’s south-western region. According to the plan, CPEC will be implemented through a ‘1+4 cooperation structure’ as follows: the Economic Corridor as an overall, multi-sectoral development project at the centre; and Gwadar Port (Pakistan’s deep-sea-port and flagship project within CPEC), energy, infrastructure, and industrialisation as its four key areas of collaboration. To operationalise this endeavour, the corridor combines several components, such as roads, railways, local public transportations, pipelines (for oil and gas), trade, special economic zones, transport, energy (both renewable and non-renewable), communication networks, financial services, centers for research, education, and health among others. The project, which is mainly financed by China (with some Pakistani co-funding), is expected to be completed by 2030 (i.e. the long-term projects). Some parts of it are likely to be ready within the next one to three years (i.e. the Early Harvest projects).

Having this in mind, OBOR in general and CPEC in particular, seem to offer many possibilities for regional cooperation, especially for India. But until today, New Delhi has hardly responded to any of the invitations to join CPEC. Nor has it spent made much effort to push its own economic corridor with China via Bangladesh and Myanmar (the second South Asian part of OBOR). This raises the questions of why India remains so reluctant to define its position towards and perhaps a potential role within OBOR? What are the roots of New Delhi’s obvious uneasiness with CPEC? Basically, besides all the opportunities associated with OBOR, there are certain issues that make New Delhi feel uncomfortable in joining the initiative.

Firstly, there are concerns among India’s decision-makers about the increase in Pakistan-China security cooperation alongside CPEC and the possibility that the Gwadar Port may one day become a Chinese naval base. In other words, CPEC heightens the notion that the Sino-Pakistani partnership poses a challenge to India’s regional standing and could be an attempt to contain New Delhi’s influence in South Asia and beyond.

Secondly, the fact that the corridor crosses Gilgit-Baltistan, a part of the disputed area in Kashmir, is a major roadblock for India’s participation in the project. Any potential cooperation which includes India in CPEC development might be interpreted as a legitimisation of the status quo regarding the territory controlled by Pakistan but claimed by India.

Thirdly, there are suspicions around the overall OBOR project, especially regarding China’s real intentions. Basically, there is a view that Beijing is aiming to push its own stagnating economy and to develop its remote western province (XUAR) by increasing connectivity with Central and South Asia. Additionally, taking the tremendous demands and nature of China’s manufactural industry into account, it is perhaps not surprising that the country is launching vast activities to ensure energy security and supply of resources as well as access to new markets. As such, major Chinese development projects outside its own territory are not rare and can be traced back to earlier economic development schemes like the ‘Go-global/global out’ strategy with which Beijing tried to encourage Chinese companies to invest abroad and/or to establish the so-called Chinese Overseas Special Economic Zones (SEZs). What is entirely new, however, is that China is attempting to transform its economic success abroad into political influence for the first time. Therefore, OBOR can be seen as the most visible expression of Beijing’s desire to create a new multi-polar order which sufficiently addresses Chinese national interests.

By looking at the tremendous geographical (around 60 participating states) and financial dimensions (The Economist cites official figures saying there are around 900 deals under way, worth $890 billion), it becomes apparent that OBOR is far more than just a ‘development initiative’. Even if Chinese officials refuse to use a term other than ‘initiative,’ it is clear that OBOR is China’s ‘New Grand Strategy’ determining the main focal point of its foreign policy and diplomacy.

However, New Delhi is not the only one puzzled about the magnitude and security-related implications of the New Silk Road. Even though Beijing has emphasized that all its foreign investments are based on mutual benefit and not designed to create a hegemonic position for itself, the way OBOR is carrying out its projects does not help dilute India’s concerns. Especially worrying has been the lack of transparency of decision-making combined with an insufficient level of communication by Chinese authorities and the questionable profitability of several projects. All these aspects are now accentuating Indian skepticism about OBOR. The fact that China refuses to negotiate OBOR in multi-lateral arrangements seems to confirm the criticism about the amorphous character of the project which is complicating a constructive dialogue with India on the initiative. This is an unfortunate development because India would not only miss participating in a much-needed improvement of regional connectivity and economic opportunities but will also find its access to markets and resources in Central Asia and Africa more difficult.

To conclude, New Delhi will likely have to take a decision soon on whether to join OBOR, especially CPEC. In case it decides not to join, it will have to come up with a workable and credible alternative concept, or else it could find itself relegated to the backyard of the Chinese-initiated economic integration of new ‘Eurasia’.