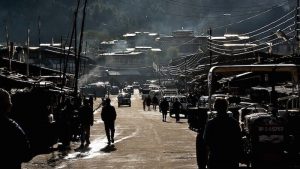 On 5th February 2016, Queen Jetsun Pema gave birth to her first child, a son, at the Lingkana Palace in Thimphu, the capital of the last Himalayan kingdom of Bhutan (Drukyul – Land of the Thunder Dragon). The royal birth of His Royal Highness The Gyalsey will most likely indicate the further entrenchment of two major trajectories in Bhutan’s political development.