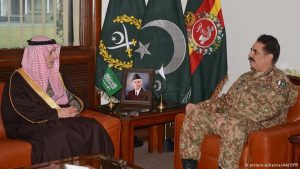 Pakistan’s former army chief Raheel Sharif has been appointed to head a Saudi-led military coalition. Analysts say this could jeopardize Pakistan’s ties with Iran as the 39-member alliance is heavily involved in Yemen. Pakistani Defense Minister Khawaja Muhammad Asif has confirmed that General Raheel Sharif is to command the 39-member Islamic Military Alliance. The alliance was formed by Saudi Arabia to deal with conflicts in the Middle East, particularly to quell the Iran-backed Houthi insurgency in Yemen. END_OF_DOCUMENT_TOKEN_TO_BE_REPLACED

On 16 December 2014, terrorists burst into a school in Peshawar and killed more than 130 students aged between 10 and 18. The attack was the worst in Pakistan’s history, and many had hoped that after years of ambiguous government policies, which included support for terrorist groups active in various regional theatres of conflict, the horrifying events would signal a turning point. The massacre in Peshawar shocked the entire country and revealed the urgent need for immediate and thorough action to combat terrorism.  END_OF_DOCUMENT_TOKEN_TO_BE_REPLACED

Basically one can state that the world is experiencing in the last decades a tectonic shift in is overall security situation determined by a tremendous decline of major deadly conflicts in quantitative terms. Furthermore, there is a new kind of conflict scenarios. Doubtless the most consequential one is the ‘war against terror’ initiated by the US, exemplifying how the nature of war is changing in recent history. END_OF_DOCUMENT_TOKEN_TO_BE_REPLACED

Since 9/11 the world has regarded Pakistan and Afghanistan as the epicentre of Islamic fundamentalism. Many of the early observations dealt with the tremendous challenge that terrorism and religious militant extremism would pose for peace and stability from a geopolitical perspective. Realising the increasingly complex scenarios as well as the causalities and impacts, analyses on the phenomenon under discussion were slowly but persistently broadening. In order to be able to address not only the militant, but also the socio-economic and political dimensions of Islamic fundamentalism – the networks and ideological foundations of internationally acting fundamentalist groups have increasingly caught the attention of observers worldwide. Nevertheless, despite a general broadening of the research focus when it comes to Islamic fundamentalism, it also led to the phenomenon of only seeing part of the story: END_OF_DOCUMENT_TOKEN_TO_BE_REPLACED